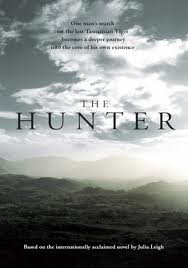 Psychological Thriller based on the novel by Julia Leigh

‘Haunting and mesmerising, The Hunter is an outstanding film that tackles a hot socio-political issue through a well crafted, character driven story This is a tense and unforgettable film that brought me to tears when I least expected it.’ — Urban Cinefile.

Premiered at the Toronto International Film Festival in 2011.

‘The Hunter is the most intriguing thriller to come along in the first half of 2012.’ — Chris Sawin, Examiner.com

‘One of this year's most memorable films, containing one of the best performances, The Hunter is a piece that creeps into the viewer's soul. It is dank and clammy, with ice in its heart, but it is also beautiful and painful, its emotional climaxes hitting home like precision bullets. ’ — Jason Solomons, The Observer [UK]

‘The Hunter is engrossing and thoughtful entertainment. It's a mystery with a message. At the core of the movie is the message that the real lonely hunter is the heart’ — Washington Post