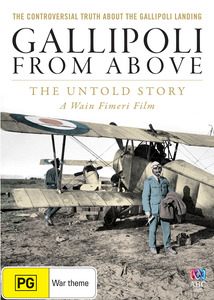 ‘A thoroughly absorbing new documentary in which former military intelligence officer Hugh Dolan attempts to overturn some common misconceptions about the 1915 Gallipoli landing. "If we're going to have a myth, an Anzac myth, let's get it right," he tells the camera. Fighting words indeed. The documentary, based on Dolan's book 36 Days, says the landing was planned by Australian officers, not British ones; that it took place at night, not in daylight; and that casualties were initially light. Perhaps the most interesting parts are the ones in which Dolan lays out the prelude to the landing. He does a good job of explaining the strategic importance of the Dardanelles; the reconnaissance flights that enabled Australian planners to build up a 3D map of the Gallipoli Peninsula; and of the role played by British diplomat-turned-spy Clarence Palmer.’ —Sydney Morning Herald

Anzac Day is the single most sacred and controversial day in the way Australians think about themselves. Commemoration of that day, April 25th, 1915, generally concentrates on the landing in the dawn. It is the reason we have a dawn service. That dawn turned into a terrible day that turned into a worse eight months of carnage that was the battle at Gallipoli. When it was over, it was time to wonder what it all meant, and what it could possibly have been worth? That question remains with us still, and that is in the end, maybe the most engaging thing about Gallipoli. There aren't many questions that still beg an answer some one hundred years after they were asked.

‘Former military intelligence analyst Hugh Dolan sets out to overturn what he says is a myth. It is fascinating viewing.’ — Herald Sun

Hugh Dolan has written a curious and terrific book that throws some pretty interesting light on the Anzac Landing and the Gallipoli campaign in general.

The common perception of the Anzac Landing is that it was a slaughter on a beach in the dawn, the wrong beach, planned by incompetent British Officers on a beach they knew nothing about. They sent us to die.

It turns out to be somewhat different. It wasn't at dawn and it really wasn't a slaughter.

Gallipoli from Above is about the events, the plans and the reasons behind the greatest seaborne invasion the world had yet seen; and the small beach that would be called Anzac Cove.

It was a pleasure to make. I felt that I was engaged in telling fresh and surprising stories about an event and a place long settled. It's the story of how we came to be on that fateful beach on that fateful dawn, and will change the way you think about Anzac Day