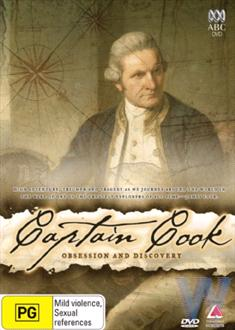 James Cook ‘discovered’ more of planet Earth than any other human being. He wasn’t an aristocrat, he wasn’t born noble; he was the barefoot son of a farm labourer who rose to the dizzying heights of a God. He was a savant who said he wanted to go not only farther than any other man, but as far as it was possible for a man to go.

‘One problem with learning about history in the school room is that many incredible feats are reduced to dates and basic details. If only all tales were recounted like Captain James Cook's in this fantastic four-part documentary. Gripping stuff.’ — Daily Telegraph

‘THUMBS UP! Narrator Vanessa Collingridge manages to draw the viewer into this majestic journey with her bountiful enthusiasm.’ — Sydney Morning Herald

‘An intriguing examination of the way technology, society and the man’s own talents combined to produce a figure who, quite literally, changed the world.’ — Sunday Age

Geographer, historical consultant and bestselling British author Vanessa Collingridge searches for the man behind the legend as she traces his story in a series that is part biography, part travelogue—and completely enthralling.

A hero to some, a villain to others, this son of an English farm labourer described more of the globe than any other man in three incredible voyages.

Discover the man and his times. Step back into the 18th century to experience what it was like to navigate uncharted and unknown waters in search of a legendary Great Southern Continent and then a North West Passage through the Arctic ice; as well as to be among the first Europeans to visit exotic Pacific islands like Tahiti.

Witness Cook's discovery of Hawaii. Sail the uncharted coast of New Zealand, proving it isn’t part of the ‘great south continent'. Land with Captain Cook at Botany Bay as he claims Australia for king and country—a ‘discovery’ that goes unquestioned for over a century.

Meet the men of the Endeavour, Resolution, Adventure and Discovery, and learn what sea-life was like for the sailors and scientists who made it all possible, including the celebrated gentleman-botanist Joseph Banks and a young naval officer named William Bligh.

It’s a tale of obsession and discovery, respect and brutality, courage and madness, from the pomp and splendour of the royal courts of England to death on a beach on the far side of the world.

‘The most comprehensive documentary ever made about James Cook.’ — Daily Telegraph

James Cook and Endeavour were like that other Captain charged with, 'the final frontier.... to explore strange new worlds, to seek out new life and new civilisations, to boldly go where no man has gone before.' I refer of course to Captain James Kirk of the Starship Enterprise. James Cook of HM Bark Endeavour said a very similar thing.

Endeavour was a deep space probe. At the time of James Cook's voyage, about one-third of planet Earth was completely unknown to Europeans. The bottom end of the planet was blank. Cook sailed into this blank, he left the known world, and like a space vehicle, voyaged out completely alone, into the unknown at the underside of the Earth.

This is my favourite shot from the series but it never made it into the final cut. The shot was worked out in consultation with the chopper pilot on the floor of my office. I took off my right shoe and placed it on the carpet. With the toe as the bow, and the heel as the stern, the shoe substituted for Endeavour. Then with a small handheld camera, and pretending to be a chopper, I zoomed over the shoe, and in the viewfinder, managed to turn the shoe upside down.

It worked. The pilot thought it could work. Then we tried the real thing at sea, off the coast of Tasmania.

‘The program removes Cook from the comfort zones customarily created for him and shows him as both a brilliant but flawed and driven man. He left an extraordinary legacy in scientific terms. This was effected by dedication to his purpose and his duty which overrode the demands of his personal health and safety leading ultimately to his death. As it is interesting to the scholar as well as to the neophyte, Captain Cook: obsession and discovery sets a new standard for a well-researched history which is vivid, exciting and accessible.’ — NSW Premier's History awards

James Cook was an extraordinary map maker. Perhaps the best there's ever been. Modern satellite imagery shows not his limitations, but his uncanny accuracy. He could read the sea the way a blind man can read the face of a coin with his fingertips. He commanded in terrifying circumstances and never seemed to show fear. His work ethic was superhuman. He was an excellent astronomer. He was capable of murderous violence and yet he was humane, worried both for the welfare of his own people, and those to whom he was bringing the doubtful benefit of European civilisation. He knew he was the thin edge of a wedge that would destroy worlds.

On his last voyage, when he reached Hawaii, he had been at sea too long. He was fifty years old. He was ill. Worn down. He'd been set a difficult task on this voyage. He was fighting time, weather, and his ships were not adequately prepared. He was under pressure and in Hawaii I think he realised a truth that truly tipped him over the edge. He found the Hawaiians to be Polynesian. A people who voyaged over, and settled more of the surface of planet Earth than any other. Here he was, in charge of the most technologically advanced vehicle of his civilisation, feted as a great navigator, lauded as a great discoverer, and everywhere he went, the Polynesians had been there long before him.

His own talent, his own obsessive nature, his determination, his genius, all had taken him to an isolated place. Alone. Neither connected to one world nor the other, happy only at sea where he could control, predict and order the world of the ship, he voyaged geographically but he also voyaged within himself, beyond human affairs.

On the last day of his life in a small, sacred bay on the Big Island of Hawaii, he made foolish, provocative and murderous decisions. He is largely responsible for his own violent death at the hands of the Hawaiian people.

From that death in the shallows of a sacred bay, James Cook grew into a legend. They wrote plays about him. There was a French ballet. There was Captain Cook wallpaper depicting his voyages. His statues can be found almost anywhere there's a shore. The space shuttle Endeavour is named for his ship. There are Cook towns, Mount Cooks and Cook places on maps everywhere. There's a Cook crater on the moon.

It's hard to know what he would have thought. What personal accounts survive of him, he was taciturn to the point of silence. He had no small talk. He was a Yorkshire farm boy. He didn't care for legends.

‘The location work in Yorkshire, Canada, New Zealand, Tahiti, Hawaii and Australia is wondrous to see.’ — Sydney Morning Herald, Show of the Week

A Film Australia National Interest Program. A Cook Films, Ferns Productions, South Pacific Pictures and December Films production. Produced with the assistance of New Zealand On Air, the Canadian Television Fund and Film Victoria, in association with History Television, ZDF in co-operation with ARTE and the Australian Broadcasting Corporation.
An Australia - Canada co-production.

‘This enthralling documentary carefully balances the insights and narrative of British author Vanessa Collingridge and re-enactments of Cook's expeditions without interfering with the enthralling story that unfolds.’ — Sydney Morning Herald

Available on DVD from the ABC Shop